Mali will hold a presidential election on July 28, according to a draft law adopted by the cabinet as the nation struggles to move on from war and an 18-month political crisis.

Mali’s government announced the elections on Monday in a communique that set out the dates for the campaign and runoff elections.

The announcement suggests that the West African country is serious about holding the ballot, despite the fact that the capital of one of the country’s northern provinces remains under the control of an anti-government group.
„The campaign will open on Sunday, July 7 at midnight and close at midnight  on July 26,“ the draft law read.

Acting President Dioncounda Traore has said that neither he nor his ministers will stand in the polls, which will go to a second round on August 11 if required.

The ballot would be the first since a coup in March 2012 that ousted Mali’s democratically elected president just months before he was due to step down at the end of his final term in office. The coup created an opening that allowed groups allied with al-Qaeda to seize northern Mali. 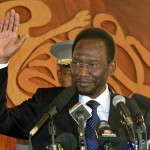 Mali’s acting President, Dioncounda Traore,  has said he will not stand in July’s elections [EPA]